Elshaday, could you tell us something about the importance of memories for you personally, as someone who has lived in different countries around the world?

Our memories are collected through the basic five senses, this information is then crunched through some arbitrary lens, of some particular culture one finds one in. The stories that are echoed are then enhanced through time, imprinted in the collective and personal mind.

Often as peoples, from such and such place, country continent, culture, tribe, ethnicity we have events that are not always experienced by every member, but repeated through stories and myths and are absorbed in the collective memory creating a convincing identity. 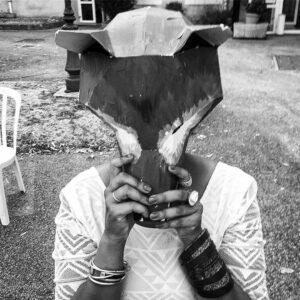 DreaMeMory is a personal journey of exploring the self through constructed lens of remembrance. Memories are a intrinsically personal snapshots and combinations of events. Precariously woven together to construct a seemingly coherent projection of oneself, echoing our existing beliefs to determine our external outcome.

Controlled experiments have shown that our memories are often unreliable and easily prone to corruption. Yet we construct our whole reality from them. This blind leap of faith is fascinating to me.

How come you have crossed paths with Project Wildeman and what triggered you to collaborate?

Initially we crossed paths through friendship with Wildeman Maarten Vinkenoog. The beginning of this collaboration began from a conversation about our personal experience of missing big chunks of our childhoods leaving gaps that are unexplained.

DreaMeMory in Splendor, can you disclose a little bit about what is going to happen?

Alongside poems by Maarten and sound by Project Wildeman, I will be using an old children’s Amharic nursery rhyme that holds a particular significance to me from my childhood. This song was thought to me by my late mother and takes me to a precise moment of remembrance.

The show playfully explores this fear and discrepancy through visuals, sound, poetry and performance. I will be performing alongside an interactive piece I constructed. The piece is made of a series of  panels and curtains hanging between the audience. The structure is covered in black and white line drawing inspired by a series of spontaneous drawings made during a consciously unconsciously drawing exercise.

What do you hope visitors will remember from DreaMeMory?

“Knowing that conscious decisions and personal memory are much too small a place to live, every human being streams at night into the loving nowhere, or during the day, in some absorbing work.”

Born in Ethiopia, Elshaday Berhane is currently based in Amsterdam. She studied and worked in the UK (London and Nottingham) for over twenty years. After doing Fine Art Foundation at Camberwell School of Art, she went on to complete a BA degree in Contemporary Art at Nottingham Trent University (1998). She went on to co-found and run Thingland studios & gallery in Nottingham (2004-2010).

Elsahady: ‘I am interested in the intangible and ephemeral. Through paradox, fantasy and humor, I explore my own versions of the truth. My work possesses a toy-like or naive quality, with a subtle underlying maniacal cynicism that creates a feeling of unease.’